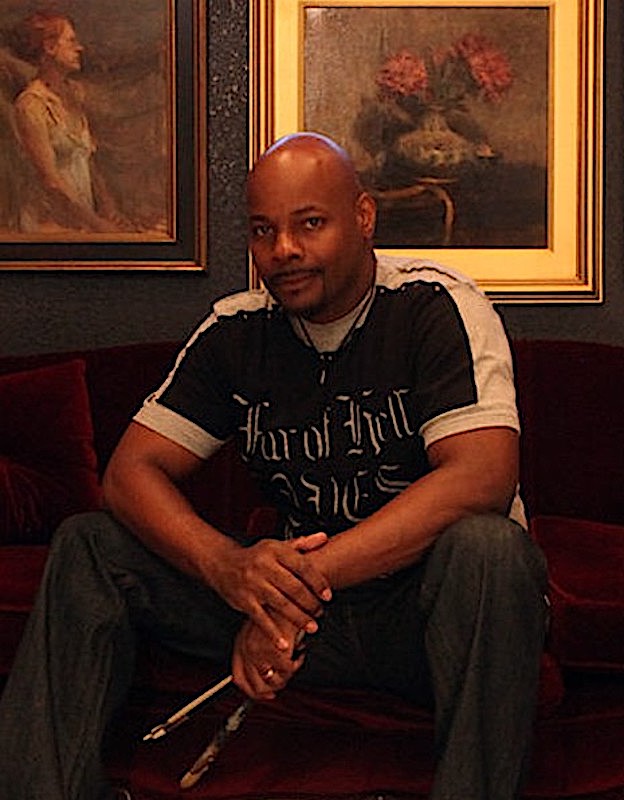 Born in Columbus, Ohio, in 1965, Ron Hicks was an avid artist from an early age. Hicks began his formal studies in art at the Columbus College of Art and Design in Ohio. Hicks continued his studies at the Colorado Art Institute, where he explored commercial art. Hicks returned to his passion for fine art painting, immersing himself in his art full time with the support of a benefactor, and quickly gained exposure through gallery representation. Hicks described his early work as representational, but stated he had an epiphany when working on a collaborative show where he was paired with an abstract artist. Their work took on a form of communication through the visual media, where he honed his style and emerged with a new outlook on his painting style. Hicks was passionate about evolving as an artist, combining his figurative work with building upon abstract surfaces, letting his works unfold in a new and exciting way. Hicks shared, “If you can make a statement that evokes an emotive response, the subject doesn’t have to be something specific. Art should be a dialogue, be a living, breathing thing.”

Ron Hicks described his journey as an artist and his ever evolving craft, “In a way, it’s a crisis of faith: I know what I’m seeing and what I want to put out.. It’s not representational, it’s not abstract, it’s not the current standard of Black art. It’s just Art.” He continued, “I do know I have something to say and I know I can’t help myself from saying it.” Hicks shared, “There’s always this sense of harmonious connection that I’m trying to explore and achieve. This work is so personal, I can’t put constraints on it. It isn’t done until my mind, heart and soul releases it.”

Winner of the 2020 Artist Choice Coors Western Art Exhibit award in Denver, Colorado, Ron Hicks has been recognized by numerous art organizations across the southwest for his fine art painting. Hicks has taught for nearly two decades, hosting symposiums and teaching positions in Denver, Scottsdale and Houston.

American Art Collector wrote about Hicks, “His influences are broad, from Velázquez to Whistler. He reads, studies, looks closely at the paintings of earlier masters and then creates his own expressions, unique in today’s world. Dostoevsky wrote, “To go wrong in one’s own way is better than to go right in someone else’s.” Hicks is going right in his own way.”