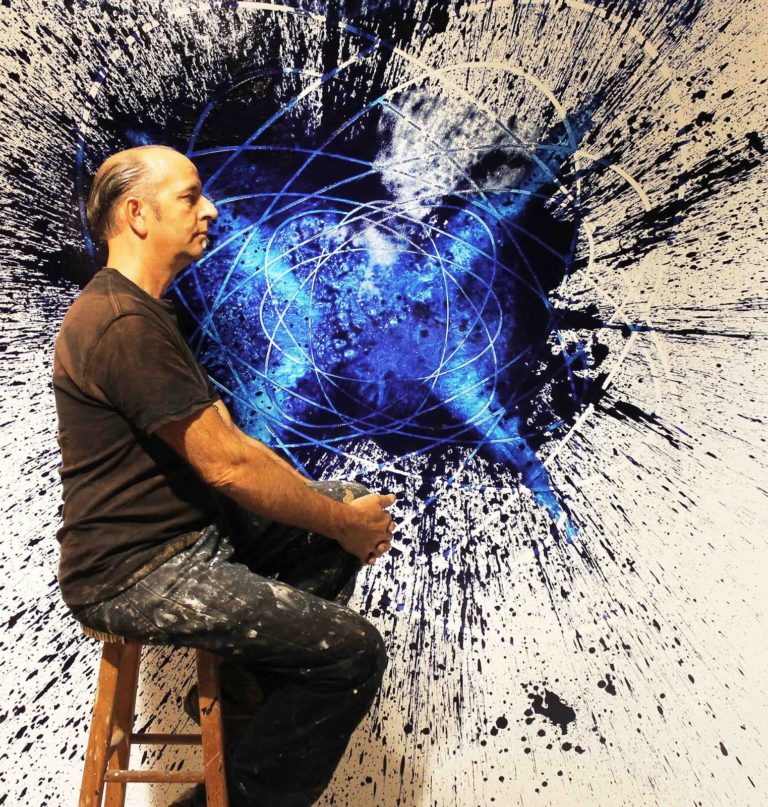 Quim Bové is a Catalan artist known for his symbolic, abstract paintings executed through his dynamic brush strokes reflected across his collections.

Much of Quim’s early influence came from compatriot painters like Dali, Miro, Picasso and Tapies; however, the interest in the abstraction lead him to connect with American Abstract expressionist movement as well.

Quim took a stance against what he believed to be a rigid academic system of the arts and therefore began his self-taught training as a painter in 1978. Quim thought his inspiration and creativity could not be corrupted with others criterion or academic rules; he kept this mentality after his earlier academic experience. Despite his position towards academia, he had a rigorous self-teaching method derived from Master Painter’s manifestos and techniques.

The pivotal point in his career that changed his philosophy of his art work and also his technique happened when he moved to what he claimed to be a place of great mystical power and energy, the Sonoran Desert in Arizona, USA. This important event brought about the beginning of his inspiration behind the relationship of beings, the energies that surround them and the connection to the metaphysical forces of the universe; therefore, constituting his symbolic abstract signature style.

His restlessness for experimenting with different techniques has evolved and culminated into his unique and distinctive style which he describes as his own calligraphy. This is represented throughout his most recent series: “Architecture of the Universe.”

He developed and refined a sophisticated layering technique that creates depth transcending the two-dimensional form of the painting, resulting in a powerful and complex surface in which the reflection of the spectator becomes part of the art piece thus creating a visual dialogue.

Quim Bové participated in over thirty solo exhibitions and numerous group exhibitions. In 1995 he founded a conceptual art group “Andorran Currency” which at the time depicted the country’s political landscape.

He exhibited his works in multiple international gallery venues and collected in private and public collections including but not limited: