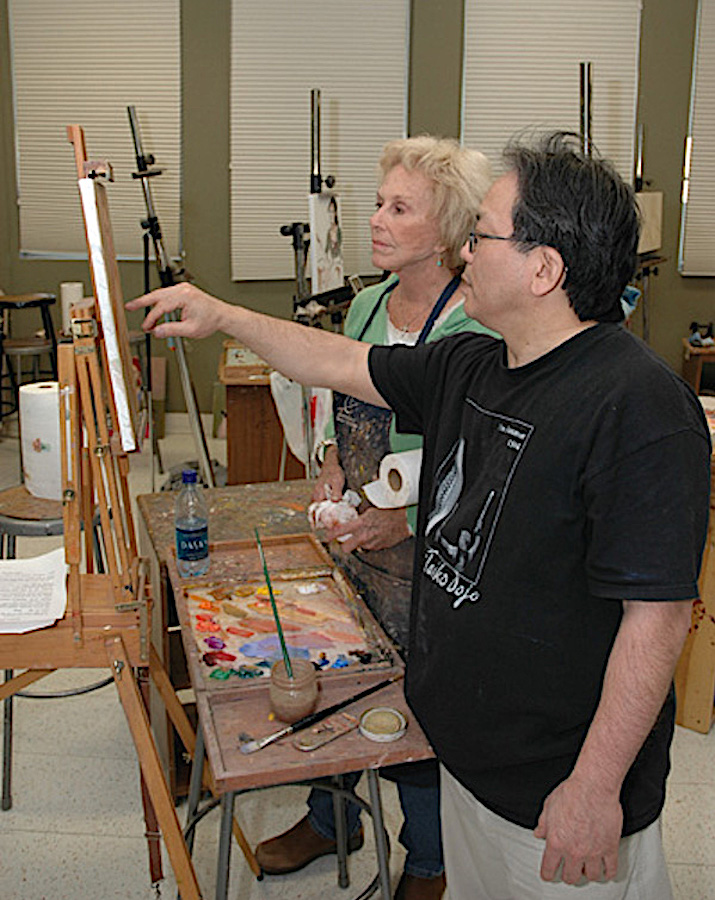 There is a quiet sophistication in Milt Kobayashi’s painted canvases, summoning a pensive, etheral feeling in the viewer. Kobayashi’s subjects are people from another time and place, yet, they ae strangely familiar. They are urban dwellers lost in thought as they take a momentary respite from their routine. Kobayashi’s people are absorbed in the world of contemplation and meditation–making them attractively aloof.

A third generation Japanese-American, Kobayashi was born in New York City, soon after that this family moved to Oahu, Hawaii, and then ventured to Los Angeles when he was eight. After receiving his B.A. in 1970 from the University of California-Los Angeles, Kobayashi began working as an illustrator. In 1977, Kobayashi returned to New York City. As a young illustrator working in New York, Kobayashi frequented the Metropolitan Museum of Art to study the old masters — Sargent, Chase, Duvanek, Vuillard and especially the paintings of Velazquez. Strangely enough, it was through the study of western masters, especially Whistler, that Kobayashi became aware of Japanese art and “the Japanese floating world of Edo”. He began studying the 16th and 17th century Japanese Ukiyo-e woodblock print masters Hokasai, Sharaku and Utamaro. The whole perspective of Japanese art allures him — the patterns, color, harmonies, use of negative space, and primarily, composition and design.

Kobayashi himself a creature of the city at night, is drawn to the same foreboding, noctural scenes that magnetized Toulouse-Lautrec. Known for his urban cafe and bar scenes which dominated his work in the 90’s, he has moved to the non-smoking section and is gravitating toward quieter settings — an afternoon tearoom, a milliner’s shop, the tranquility of a private home. Still a tonalist, he admits to a growing freedom in his use of color. The intricacies in fabrics and accessories fade as patches of stronger color emerge. Backgrounds of red or green and the artist’s extensive use of black intensify his compositional use of negative space and serve to focus attention on atmosphere. While he is less and less a painter of details, it is the hint of detail that most intrigues us, and Milt Kobayashi has perfected the fine art of subtlety.

British art correspondent, Godfrey Barker wrote of Kobayashi, “Milt Kobayashi’s compositions are wicked in their education, wicked in their skillful calculation and wickedly clever in their balance, their tonal contrasts and their negative space. In short, we’re looking at an unusually professional and well-sourced artist, cultivated in a manner uncommon in the desert of Disney that is modern America. He’s apart from his age and we need to see more of him!” (London Evening Standard, November 1988.)

Kobayashi has received two major awards: the National Academy of Design’s Ranger Purchased Award and the Allied Arts Silver Medal. His work has appeared in Forbes, Fortune, and Reader’s Diget magazines. His work was featured at the Artist of America show in Denver, CO for several years and he has had many sold out shows throughout the United States and England.