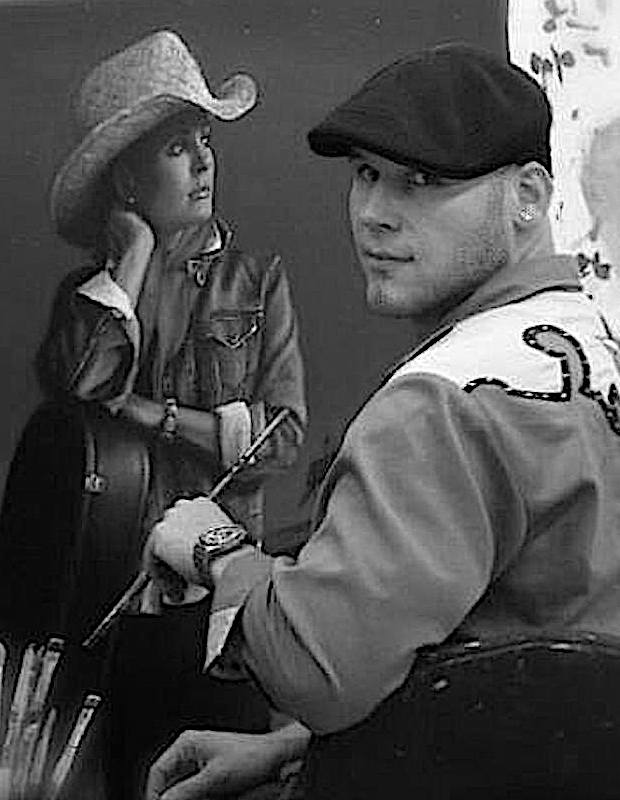 Lane Timothy was born and raised in the small town of Missoula,

Montana where at a very young age he discovered a love of art.

Lane sold his first painting to a neighbor for $10.00 at the tender

throughout the community, he was commissioned to paint the

just sixteen. That was his first commission and they haven’t stopped

since that day. Lane worked as a designer at a local t-shirt company

throughout high school, which sparked his interest in graphic

design. In 1993, Lane was awarded the Charlie Russell National Art

Scholarship, which he used to attend the University of Montana to

and started his own graphic design company with a friend, instead

of enrolling in school.

This turned out to be a smart move, his company was successful and

he learned important hands-on skills in the design world. After two

years of owning his own business, Lane felt ready for a move to a

bigger city. He applied for a position as a graphic designer in a large

design firm in Salt Lake City and sure enough, he landed the job.

Throughout his graphic design journey, Lane continued to paint in

his spare time; he never went long without picking up a paintbrush.

After two more years of working in design, Lane packed his

belongings, and drove back to Montana, he said, “I was growing

anxious at work, because all I wanted to do was paint.” Despite

wonderful job, with a consistent income, Lane knew in his heart he

had to do what he loves or he would live each day full of regret.

felt happier. His first art show nearly sold out and this gave him the

confidence that he had made the right decision. Work has not

days painting and following his dreams.

Lane has made quite a name for himself in Missoula, his work is

displayed all over town in several restaurants, banks, retail stores,

the University, not to mention in numerous homes throughout the

valley. His appeal does not end there, his paintings can be seen in

Another passion of Lane’s is giving back to the community. He has

donated art to Big Brothers and Big Sisters for many years,

contributing over $60,000 to their organization. He also donates a

painting each year to the University of Montana rodeo team, raising

thousands and thousands of dollars for their program. In 2002, Lane

Hospital in Vancouver, Canada. The painting sold for $57,000 and

100% of the proceeds went to the hospital. Lane will continue to

donate where he can by providing original works to support

organizations close to his heart.

been painting more than ever. He feels that after all these years, he

has finally found a unique style that is unmistakably his own voice.

He has experimented with many creative genres but admits that

realism, with a contemporary twist is his undeniable favorite. His

afternoons riding around the city on his bike snapping pictures of

ideas for potential paintings. He has been fortunate to visit Europe

twice to study the techniques of the classic masters, he spent hours

on end roaming the galleries and museums, mesmerized by the

unbelievable talent. Lane stays in his studio for long hours with his

nose in a book, studying everything he can get his hands on about

masters of the past and present, their technique and ability. Lane

admires many artists but his favorite is John Singer Sargent. “I love

his suggestive strokes, he is a master of the brush.” Lane was

Sargent painting proudly displayed. His said it took his breath away.

On the March/April 2005 cover of Sky West Magazine, there is a

undeniably a field in Montana. Lane painted the Montana cowboy

and titled it “Daydreamer.” Lane considers himself somewhat of a

daydreamer, he is constantly dreaming of the places he’ll go and

the things that he’ll see. He said, “Art is amazing because it

enables you to take what is in your head, and put it onto canvas for

the world to see.”

reaching some of the top prices in the market. He feels that this is

his gut instinct and kept his dream alive, to be an oil painter.

Despite his success, Lane maintains his modest attitude and

continues to focus on expanding his abilities. Lane’s most recent

series of paintings that will go back to some of his roots, back to

the country, back to the West and the people that helped shape this

country into what it is today. He has a true passion for our history,

the way of the cowboys and the Native American population that

existed at a time that was not mired by technology. A true time of