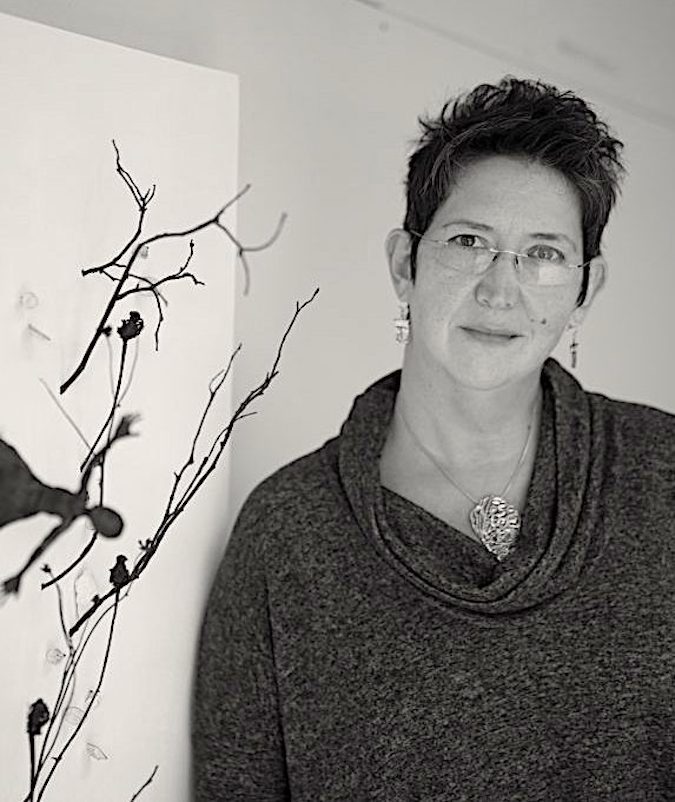 Holly Wilson received her BFA from the Kansas City Art Institute in 1992 in Ceramic, an MA in Ceramics 1994 and an MFA in Sculpture 2001, both from Stephen F. Austin State University, Texas. Holly has exhibited her intimate bronze sculptures and her mixed media encaustic relief sculptures nationally. Wilson’s figures draw both from real life and legends of her Delaware and Cherokee background. She now lives and works from her studio in Mustang, Ok.

Artist Statement:
My figures serve as storytellers, stories of the sacred and the precious, capturing moments of our day, our vulnerabilities, and our strengths. They are the quiet echoes of life’s delicate balance, telling a story of the fragility in both life and their own form; how far one can reach, which step may be too many.

As a Delaware/Cherokee Native American, I grew up hearing many stories from my mother. I was drawn to those of shape shifters with the idea of a trickster who wears a mask to hide their identity, birds as messengers, and owls as bearers of tragic news.These stories also now run through most of my work in the form of animals with human characteristics, masks of birds and other animals. I anthropomorphize the animals andbirds, giving one the eyes of a tired old woman, and another the hands of a strong man holding the branch on which they perch. In some the titles refer to the actual name orvoice of the birds, for example, “Peto, Peto, Peto” is the courtship song of the Tufted Titmouse.

The masks some of the figures wear are layered with meaning from creatures in nature to a child’s imagined world. As children, we make and wear masks to be anything we want or need to be and we could do anything in them from being a super hero to a bird in flight. As adults, the layers and meaning deepen and grow and these masks are a way to represent the different personas that we need or desire to be in life. They become an identity that one can live through or hide behind in our roles – I am a daughter, a sister, a friend, an aunt, a wife, a mother, an artist.

The figures I cast in my studio with the traditional method of lost wax casting in combination with mixed media elements. The figures are one of a kind and singular in edition; no two are alike.