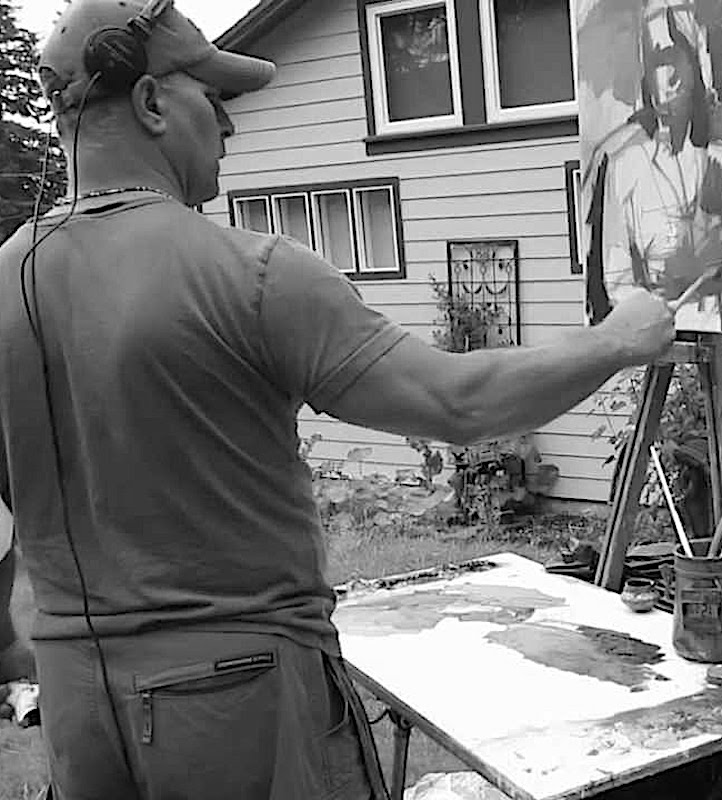 Henry Stinson’s world is not a world of black and white. His is a world dripping with bold, bright colors in richly textured shades of allegorical meaning and humor. His uncanny ability to milk a life-changing metaphor from a fire hydrant, a model’s mood, or a toy robot is priceless in today’s world.

Gifted with the body of a power-lifter and the heart of a child, Stinson likes to do things larger than life and says his first real painting at the age of ten had been of a vampire. Stinson lives with his family in Pullman Washington and gardens with the passion of a Zen monk. Meditation and narrative messages of hope beyond the world of the physical senses lie hidden in his paintings.

A near-death experience with electrocution (behind his family’s living room couch at the age of five) left Henry’s perception of reality forever altered. Moses went to the mountain and was touched by God. Henry says that he was touched behind the plastic covered yellow couch of his parents’ home. That touch was enough to inspire reverence for all life and foster Stinson’s artistic gift to see the sacred in the mundane. Whatever the origin, Henry has the singular ability to translate moments into paintings, making his work popular with private collectors both in the US and abroad.